Aaron Anderson was born in Michigan in 1981. He was a chubby little blonde who never met a ball he didn’t want. He excelled in gross motor skills and language development. The diagnosis of NF1 at age three was a shock. If a friend hadn’t shown his mother her own daughter’s cafe-au-lait spots, the family would never have guessed that anything was amiss.

Apart from some fine motor delays and a moderate degree of ADD, Aaron’s NF had only minor impact on his early school years. His thoughts would get ahead of his slow handwriting, which made for messy assignments. Although he learned easily, his notebooks were a chaotic mess. He left a trail of possessions wherever he went. He studied in 20-minute bursts and always with TV or music (hiphop) going. At night the hum of a fan helped him sleep. On the plus side, his quick wit, diplomacy and generous nature made him everyone’s friend.  Besides his love for balls, ball sports and music, he continued to add new interests. 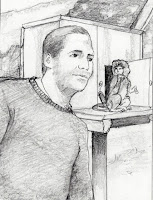 After junior year he entered a two-year international baccalaureate program in New Mexico. The program, designed to promote world peace, had only 200 students - 50 Americans and 150 from dozens of other countries. There he developed an interest in Tibetan Buddhism and added friends from around the world. Next was the University of Michigan, where his ADD caught up with him. Having chosen grades over sleep, he was heading toward a crash.  Enter Concerta, the salvation of his college career.  By cosmic good fortune Michigan regularly hosted a summer Tibet program.  This painting is from a photo taken on the first of three Tibet trips. In those same years his music passion shifted to a genre known as Northern Soul produced in nearby Detroit. He would scour Detroit junk shops, “digging” for obscure 45s from the 60s and 70s.

In 2006 Aaron was accepted into a PhD program in California to study child development. It only took a year to realize he wasn’t enjoying life as he had in Ann Arbor. Grad school didn’t have room for his wide-ranging interests. He planned to finish the two-year Master’s degree and recalculate his future.  Everything changed in March 2008; he stopped going to class, answering emails, texts, phone calls or knocks on his door. It took three months of this reclusive behavior to get him admitted to the psych ward of the university’s hospital. Within two days came the answer - a tumor deep in his brain, malignant and inoperable. Six months of treatment brought him back to his fun-loving self.  At  nearly 28 years old, he moved home to Michigan to live his best life, not as an academic, but as a DJ and record dealer. He died in Buddhist peace at age 30, leaving a trail of friends around the world.

The story continues past Aaron’s death in Sept. 2011. With the help of his neuro-oncologist at Michigan and NF researcher, David Gutmann in St. Louis, Aaron was able to donate his body to the Univ. of Michigan and his brain to Dr. Gutmann’s Washington University lab. Within seven years the speed and accuracy of genome analysis increased so significantly that the progression of the brain tumor, a glioblastoma, could be tracked through its many genetic changes.  A brief paper about the tumor appeared in the journal Neurology in late 2019. The family cheered. Take a bow, Aaron!