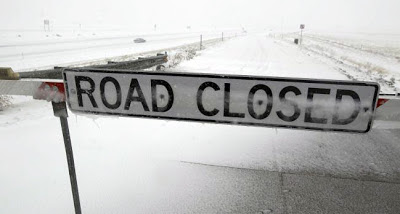 Here's a post about portraits and Winter Storm Triton.

With such a short amount of time between visits, I didn't really get a lot of time to produce as much work as I would have liked. I mostly showed my mentor the 3 self portraits done in the Apelles palette.

Probably the biggest memory of this trip out to Iowa City would be the trip back home. As I drove back it was just a little sleet and rainy mix. However, 5 semi trucks and 3 cars smashed into each other on the interstate. I sat in my parked car for 2.5 hours on I-80 until the Iowa State patrol had us all drive across the median and take the nearest exit as they were closing the interstate. In the 2.5 hours I had sat there, a blizzard was occuring and snow was accumulating around our vehicles. I could not see my windshield as my wipers were iced over. I really hadn't thought it could get worse as I drove backward toward Iowa City to get off the off ramp. I was wrong. A semi had gotten stuck on the off ramp. So, I parked my car behind him and tried to help get his wheels free from all the snow.

After that, the couple in the truck behind me on I-80 stopped and called to see if there were any hotel rooms left in Harlan, IA for us. They graciously reserved 2 rooms on their credit card. I then drove in a white out behind them to get to the hotel. The wife had an Ipad and had a GPS on it. There is no way I could see anything so I had to rely on them to get me to the hotel. At one point I had to frantically call them to stop and wait for me as I had slid off the road and needed to de-ice my wipers.

Once we got to the hotel, many frustrated, wet and cold travelers were there too. The only reason I had a room was because the couple had reserved one for me. There were no more rooms available in either Harlan nor Avoca and there were tons of stranded motorists. In the cramped lobby, tensions were running high and one kid was throwing up and I was pretty sure the mother was having a breakdown.

Because the interstate was closed as were the highways. I was thankful that the couple had reserved a room for me otherwise I would have not known what to do. I was cold and my boots must leak because my feet were cold, wet and my toes were a red and my big toes were dark blue. My room had a king size bed and a recliner. I went back to the lobby and offered to share my room with a couple from Minneapolis. They were very grateful.

So, the couple in the truck (from Sioux City, IA), me and the Minneapolis couple all shared some pizza from the gas station. Later, I shared the bed with the wife and she had her husband sleep on the recliner. They left early in the morning. I know that I'll never see any of them again. I also know that the kindness of the Sioux City couple is what saved me from that blizzard and I was happy to help someone else out too. Apparently the couple from Minneapolis had already gotten stuck on the highway off of I-80 so they were glad to just be inside and not spending the night cold and wet in their truck.

It really was a bizarre night. I am glad to be home. And I am pretty much done with winter now. No more "Winter Storm Whomever".
Posted by rmindrup at 5:14 PM No comments:

The third portrait in oil that I want to tackle is of David Oosterloo. David graciously allowed me to use his image in my first NF explorations during the first half of 2012. Now that I have settled on a theme of oil portraits of NF individuals just doing what they enjoy doing as a series, it seems only appropriate to use the man who has helped and inspired me throughout the entire journey.

Because David lives in the Netherlands, I can't really direct a photo shoot in person very easily. Luckily, his mom offered to take pictures of him building his Legos. Why building Legos? Honestly, I like when people have hobbies and/or collect interesting items. To me, it makes them seem more interesting. It also could be because I collect comic books and love to draw that I can appreciate someone else who has the same affinity toward his or her collections and interests. I believe the initial reason I was drawn to Frank earlier was that I enjoyed seeing him post about playing his guitar on FB. Additionally, I have enjoyed seeing David's Lego creations via Facebook as he will post them once he finishes a building in a series. Oftentimes it is these pastimes that help shape a person's personality or character.

I also thought painting Legos would be extremely difficult to pull off well, so why not give myself that challenge? Frank's guitar was very difficult, so now I can navigate painting intricate Lego pieces. Why not!? Now, even though I prefer a less detailed type of painting I still need to do a an underpainting/lay in drawing to get everything where I want it. I suppose if I had David here modeling for me, I could try to paint from life, but when an artist cannot paint from life, she does the next best thing. She uses photography to inform her work.

In fact, the entire premise of this body of NF portraits is drawn upon using photos taken and given to me by people I have never met before (all via Facebook). So, on one level, they are already mediating how they will be represented by what type of photos they send to me. They are making choices about how they want to be portrayed. Secondly, I as the artist, am making more decisions about which photos I will use and then thirdly how I will alter them. In some sense, this project goes through so many mediations that someone could questions authenticity of the portrait. But, then again, all painted portraits are subject to that argument since it is always the artist's interpretation of the sitter and how she wants to portray the person to the audience. While I am not purposefully channeling my inner Cindy Sherman and trying to question authenticity of portraiture, I'm sure to some degree one could argue it.

For now, I am just going to do my best to show the person first and foremost and if someone should notice that they have tumors on their face, then let their genetic disorder be of secondary cognition.
Posted by rmindrup at 11:00 AM 3 comments: