Got Plans for Lunch?


Over a series of 7 weekday lunch hours I was able to utilize 45 minutes of the 1 hour break and work, from life, on a portrait. I mostly just wanted the practice to train my eye. I told my friend that I doubted if the portrait would look flattering and I wasn't really concerned about the result. In the end, she agreed to model if she could keep the final drawing. I agreed. I drew...and when it was all done..she now has a 18" x 24" graphite portrait of herself. Does she like it? I really do not know, I think she does. I do know that she has offered to model for me in some of her ornamental outfits. She is Hindu and has some very beautiful garments and jewelry that would be very exciting to paint.
She, on the flipside, also got the unique experience of being drawn from life too. She is not an artist by trade, but a computer programmer.

I wonder if her place of employment would notice the smell of oil paint and a tarp on the floor with a french easel for the next 7 weekday lunches? hmmmm...
Posted by rmindrup at 3:55 PM No comments:

I have been wanting to do an oil portrait of a woman with NF. This is not an easy task to do. Men seem more willing to help out or at least follow through with the correspondence. Several women I asked came up with all sorts of excuses:

"I am not interesting enough..LOL"
"I am not feeling well today"
"I don't have a nice camera"
"I'm just really busy right now with school and work"
"I don't think I would be an interesting subject"

It only takes a few inquiries to realize that women are the masters of not being able to say "no" so they creatively stall hoping to avoid the conversation.

Or maybe they would like to have it done, but they are so busy raising a family, having a career that the idea of getting someone to take pictures of themselves doing what they enjoy doing is not a priority. Or it could be that they would be too embarrassed to ask a friend to take pictures because then they would have to say "This lady in Omaha wants to paint my portrait" and who knows if they are nervous about how friends and family might react.

So, it was time to get a little more creative. And then it struck me. I am asking the wrong people. Why not ask the spouse instead? A supportive spouse is the best arsenal for an artist painting portraits. So, I contacted Larry and told him I wanted to paint his wife playing her keyboard.

I have painted both Larry and Joan Hollis. They both have NF1. I painted Larry first and then painted his wife later. They both fund raised this past year to help raise awareness for NF. In fact, I donated money to their campaign as well. It is also rather interesting to meet a husband and wife who both have NF. At least they both intimately know what their partner is going through instead of just trying to guess at it.

Larry took tons of photos. Then he retook photos based on my suggestions. Then he retook them again because the resolution wasn't clear enough for me to really see Joan's face. In short, Larry had the patience of Job with me while I kept emailing him back saying "different light, don't have her look at the camera, can you do this again?" He was so willing to help and never complained when I told him his pictures weren't quite what I was after. Art directing a photo shoot via FB messages is not an easy task by an stretch.

Finally, I got some really good images. And, I am happy to say I finally am getting a woman involved in these oil portraits. Now, let's hope she likes it!

Body Prints, Mythology and Part 3 is yet to be...

Body prints...some mythology and a little poetry. It will all make sense soon. Or maybe it won't, but indulge me anyways and read along.

Sally Deskins is an Omaha artist. Besides being an artist, she is a mother, writer, life drawing model, advocate for feminism, poet and probably a myriad of other titles. She is one of those people that has helped to change the art scene in Omaha. And, for the positive.

Take a few minutes and stroll through her work on her site.

I met Sally in 2010 when I was teaching oil portrait painting and figurative painting within theatrical compositions at the Joslyn. I asked her to model for us upstairs in the Joslyn's attic amongst all the frames, books, and discarded memorabilia. The Joslyn had never previously thought about holding a class up in their attic prior to my suggesting it. Truthfully, I absolutely LOVED teaching that class and the students who attended years later ask me when do we get to paint figures up in an attic again? When? Who knows, that is up to the Joslyn, but if we do, I want Sally again!

Sally must not have found the experience too horrible because she kept modeling for me afterwards..and even interviewed me about my Many Faces of NF project for her "Les Femmes Folles , The Women 2011" book. Additionally, she has modeled for me when I teach life drawing at Metro. She coordinates the Drink N Draw event held about every 6 weeks here in Omaha. And she and I just participated in a group art show in Lincoln, Nebraska called "Femmes Qui Bercent" with 8 other talented female artists. 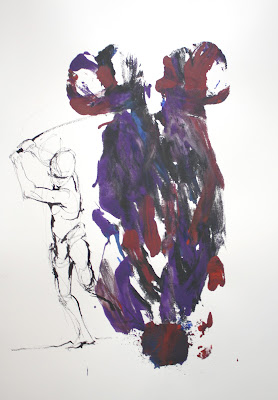 A little bit about me and the figure: I have spent most of my adult life drawing and painting the figure. Whether or not it looks like it, it is the truth. I left Omaha in my mid twenties and went to an atelier in Los Angeles to spend time studying and practicing drawing the figure. I absolutely loved that experience. I spent mornings drawing the figure, afternoons painting the figure and evening animating (okay, I didn't love being an animator, but I still loved the animation classes as well). On Sundays, I spent time building ecorches. It really ranks as one of my best life experiences. I also quit my job, drove out there all with the support of my husband who stayed back in Omaha to allow me that opportunity (score one for supportive husbands).

I think what appealed to me about Sally's work is that she uses her body as the paintbrush. She creates works that are more visually interesting than some of the work I have labored hours over. They are refreshing. In fact, I really enjoy looking at them and I love the unexpected surprises that printmaking offers. Similar to Christmas time, printmaking holds that level of excitement and the "What is it going to look like when I peel this off?" which is similar to "What is in the gift bag?" 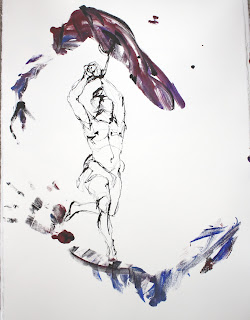 This past December, a mutual friend of Sally and mine, F. Higgins, who is a poet and who also models (she has a great Willa Cather costume if you are ever interested) engaged us all in a discussion about the role of being a model, an artist and mother.

Higgins took her idea in the form of a time based piece of art in which it involved all three of us collaboratively working together on a large mural. As I drew and Sally did her body prints, Higgins filmed us and also recorded our thoughts while we created and while she modeled and so forth. The mural was never intended to be the focus of the project. Its outcome was incidental. However, the mural ended up being visually interesting and showed me just how interesting art can be when you 1. collaborate. 2. have no preconceived ideas of anything and 3. don't care about outcome, just process.

That day of collaboration really stuck with me so I asked both Sally and Higgins if they wanted to do more pieces together. They both really seemed interested or they both  know me too well to know I will just nag them to death if they don't! haha!!

Sally dropped off some body prints a couple weeks ago and so now it was my turn today. I told her I would draw on them. I had originally assumed that I would just draw body parts as I did on that large mural (as seen above). 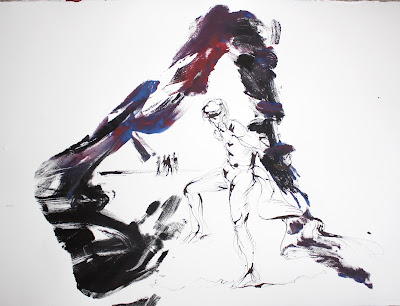 However, when I started looking at the images, I realized that they seemed less like bodies and more like beasts or land masses. The strokes were so energetic. They seemed to whisper stories. As a teen, I took 5 years of Latin because I love mythology. I went to Central High School which happens to still offer Latin as one of the foreign languages. I didn't realize at the time that other Omaha high schools did not offer it.

The reason I took Latin is because as a child I was always drawn to the paintings with narratives and most all of them are steeped in mythology. What I love about Greek and Roman mythology is how many humanistic traits the gods always seemed to have which created memorable stories. My favorite sculptor has always been Bernini, but look at what he sculpts and how he sculpts it: Apollo and Daphne, The Rape of Proserpina, etc. Even Bernini's David is still a capturing of that moment when someone wonders "What is going to happen next?" This sense of narrative is what draws me in and what I thought would be fun to do with these prints. 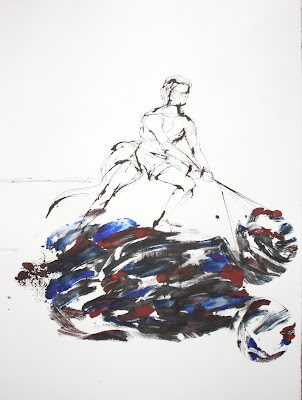 Sally had to have had an immediacy while she created these. There are no retakes, no do-overs. So, I thought, why not limit myself to similar parameters? No pencil, no charcoal, nothing that I could then "fix" later. I decided to use a long bamboo rod and treat it an extension of my hand and use ink. I would just draw forms as they seemed to interact with these color forms. Almost in the way Michaelangelo seemed to "free" the slaves out of the marble without finishing them.

However, I am only part 2 of this 3 part collaborative process. F. Higgins will be the 3rd creator as she will add her impressions via poetry and text over these. Will she have the same thought processes or narrative I do? Probably not and that is where the excitement lies.