I noticed the fact that David is sort of cramped when he does his chalk drawings. He does not spread out or look comfortable. When I asked him, he mentioned that his arms and legs start to hurt so he can only work for a little while at a time. With that in mind, I wanted the composition to also feel a little cramped to the viewer. This is typically a "composition no-no" but, then again, luckily for me, there really is no history of compositional discourse when deciding to paint people drawing with chalk on driveways. hahaha....

David has had to go through about 3 photoshoots with me already and I finally settled on the photo below with some adjustments. I hope his close friend isn't going to kill me when I asked for one more revision to the photos after receiving feedback this past June on my portrait project.

For the most part, most the artists who viewed my work preferred when the subjects "dressed up" for their portrait, noting that Joan Hollis and David Oosterloo both had interesting patterns to their clothing which made the portrait seem more formal. This subtle fact also makes the portrait a little more interesting visually to the viewer. 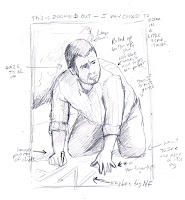 So, you can see how I gave feedback to David to redo his photo shoot, complete with getting rid of the blue t-shirt and replacing it with a long sleeved button up shirt with rolled sleeves. Mostly rolled sleeves because I don't really want him getting chalk all over his cuffs! Also, it is quite interesting to try and direct photoshoots via Facebook messages, but somehow we always seem to work together to get these done. In the end, I went back to the blue shirt because I think the subtle tie-in to the Children's Tumor Foundation is a nice touch.

David routinely participates in NF walks, rallies and such and is one of my biggest fans. Because of NF, David has a degenerative disk in the lumbar portion of his back which contributes to his spinal stenosis. He also has Chiari I Malformation with a syrinx to which he had to undergo surgery. The results of the first surgery didn't turn out very well, so he had to undergo the surgery again. Besides being a huge supporter of the Children's Tumor Foundation, he also finds time to spread awareness by his huge NF sidewalk chalk drawings. The drawings usually spell out "Cure NF" and can take up the entire length of his driveway.

Posted by rmindrup at 3:07 PM No comments: