Tiger Coffman was born in Houston in 1972. He has 3 brothers & 2 sisters. At the age of 5 he started playing baseball and fell head over heels in love with the game. Baseball became his #1 love after family.Tiger decided he wanted to be the next Nolan Ryan! Needless to say he's been a diehard Astros fan his whole life. At the age of 13 Tiger was pitching in the last game of the season. He was in the third inning when heard the ball hit the bat and looked up just in time to see the ball smash him in the face. Upon arrival at the hospital he was told that his nose was broken. The doctor did a CT scan. The CT scan which revealed three tumors in his jaw and the Dr asked how long the tumors had been there? This was the first Tigers family had ever heard anything about him having tumors.

After the surgery to fix his nose, they removed the tumors. When he was 15 one of the tumors grew back. The doctor said in order to get this tumor out, they had to break his jaw. 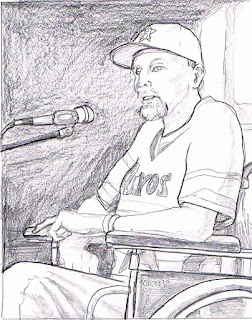 As they were getting Tiger prepped for surgery, they had just started the IV with just saline solution a beautiful, blonde headed lady in white scrubs came to his bedside and asked what he was in for. Tiger told her he broke his nose playing baseball and they found tumors and now have to break his jaw to get this tumor out. She said "God broke your nose!" To which Tiger replied "No ma'am, Hyme (his friend) broke my nose! " she then said, "You don't understand God has a plan and purpose for your life!" Tiger thought she was crazy. The surgery was twelve hours because the tumor was 6.5" long and wrapped around all the nerves on the left side of his face. When the doctor came in he told Tiger he was very lucky because he was born with these tumors but never knew they were there and had he not broken his nose he would not have found them until it was too late because this tumor was 2cm from his brain and he'd have been dead by the time he was 18. He said he has Neurofibromatosis type 1. The doctor told Tiger he would have multiple tumors on his nerves for his entire life. Tiger was then sent to MD Anderson because they were more familiar with NF.

On April 12, 1988 Tiger was invited to a youth service at Metropolitan Baptist Church. The speaker started talking about how God has a plan & purpose for our lives. That night Tiger gave his life to Jesus and became a Christian. About 6 months later he went back to the hospital to talk to that nurse and tell her he was a Christian. The lady who was his nurse that day of surgery told him that No other nurse came into his room that day, she had been the only one. When he told her that this lady had blonde hair blue eyes and was about 5 foot 6 inches tall she told him they didn't have a blond headed nurse work there in over two and a half years. Tiger went and talked to his pastor about this and he said and Tiger believes that that was an angel that God placed in his path to tell him that God loved him and has a plan and purpose for his life.

Tiger's senior year of high school he realized God was calling him into ministry. Tiger decided that professional baseball was no longer his focus, that ministering to young people was his true calling.
Tiger went to East Texas Baptist University got a degree in youth ministry and has been in Ministry since. Tiger has the privilege to travel and speak to church groups, school groups, young people and anyone else who asked him to come share his story.

In 2004 Tiger had surgery, at MD Anderson (one of the best Cancer & Tumor Hospitals in the World) going into the surgery he was told there were three tumors on C 1 2 & 3 but when they cut him open they realized there were 7 tumors from C1 to C7 Tiger was in surgery 16 hours, when he woke up he was basically paralyzed from the neck down and told he would not walk again. But by the power of prayer and the grace of God 32 days later Tiger walked out of the hospital!

In 2005, Tiger's younger brother Sonny passed away in his sleep. He had NF as well. His 2 1/2 yr old daughter found him on the floor. They used to play a game where he'd pretend to be asleep and shed kiss him and he'd wake up and tickle her! She kissed him 3 or 4 times and he didn't wake up. So she went and woke up Nancy and said Mommy I kissed daddy 4 times and he didn't wake up! Nancy, who is an RN, went to the living room and immediately knew he was gone. He had just turned 31 and his wife gave birth to their son 6 days before Sonny went home to Jesus! Tiger preached his funeral which was hard because they were very close. They ruled his death an accidental overdose on a medicine he was taking.

As Tiger gets to share his story with people, he always shares that sometimes life is hard but we have to keep going. One Tigers favorite quotes is "We can't control what happens to us but we can control how we react to it!"

Tiger has over 3000 tumors on his spinal cord and sciatic nerves and he deal with pain on a daily basis, but that doesn't stop him from living his life. Tiger loves getting to share his story with anyone who will listen especially young people. To see more of his story or to contact him to to www.tigercoffman.com
Posted by rmindrup at 9:22 PM No comments: