May is National NF Awareness Month 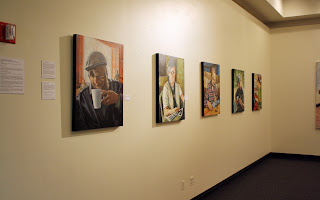 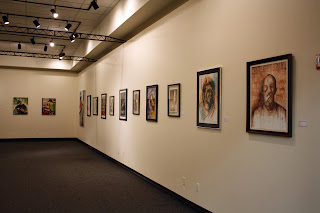 Portraits illuminate my memory with the crisp images of people, once known or previously unknown. They are now registered, preserved, and accessible through works these works of art. Rather than the portraits existing as their own material substance, instead, in their place, real persons face me from the other side or deliberately avoid my glance. The art object and human subject oscillation, represented so personally, is what give portraits their extraordinary grasp on my imagination. As Richard Brillant points out "Fundamental to portraits as a distinct genre in the vast repertoire of artistic representation is the necessity of expressing this intended relationship between the portrait image and the human original". With this knowledge, a portrait painter has the ability to craft any sort of representation she wants to create from her sitter. And by doing that, I, the portrait painter, can completely alter the way people have been previously "seen" which makes this the most suitable medium to re-present people with a genetic disorder who have only known one identity. And this is why I do what I do. 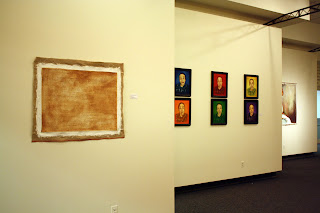 Earlier this year in February, I spoke at the Science Cafe event hosted by the University of Nebraska Medical Center. Science Cafés involve a face-to-face conversation with a scientist about current science topics. They are open to everyone (21 and older), and take place in casual settings like pubs and coffeehouses. 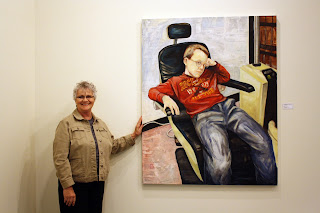 Each meeting is organized around an interesting topic of conversation. A scientist gives a brief presentation followed by a question and answer period. UNMC's Sean McGarry, M.D. and I jointly presented "The Science and Art behind Neurofibromatosis."

Dr. McGarry covered the background on this disorder, what it is, how one can get it, treatments, history, and what we know now. I followed his presentation with a showing and discussion of my paintings of people with Neurofibromatosis. Additionally, the Nebraska Public Radio's reporter, Ryan Robertson was there to interview us both and write a nice story for NPR on the event and on my on going project. To view the story, click here.

This May has been a very busy month. Mostly because it is National NF Awareness Month and I was lucky enough to have the University of Nebraska-Lincoln host my NF related artwork for a few weeks in their Rotunda Gallery. I've posted a few images from how the display looks, including a picture of both me and my mother-in-law who spent her entire day helping me hang the show. This would be a good time to publicly thank her for all she does for me. Besides helping with installing the show, she is always available to lend a helping hand and typically that means picking up my kids from school or watching them sometimes in the evenings so I can take paintings to different galleries or even speak at the UNMC event. She has been just terrific and I feel instrumental in whatever success I have had as an artist. 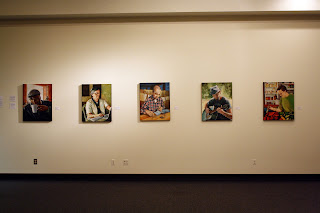 At UNL, I had twenty-five paintings displayed all of which were created in the past two years. They ranged from watercolor and mixed media to oil paintings, but they all have a current thread running through them and that is NF. There are many better ways to raise awareness for NF (or for anything for that matter) than through painting. And, one could argue, that I have picked the slowest possible means to raise awareness. However, there is a question of impact. I may not be awakening the entire world to learn about NF and that is just fine. What I am doing is letting each person painted know that someone cares about them. Not only do I care, I understand.

What has been really humbling this month is that I was interviewed twice about my Many Faces of NF project. The first interview was for the Manila Bulletin which is the leading newspaper for the Philippines. The reporter, Kcat Yarza, is a woman whose portrait I painted a few months ago. She has NF2 and has had quite the struggle with becoming deaf and partially paralyzed. Her story and interview about my project can be read here.

About two weeks later, David Oosterloo, who is a man who lives in the Netherlands with NF1 was interviewed by the Dutch media about his NF related website and forums. David is a huge advocate of NF Awareness and has been instrumental in raising awareness in both the Netherlands and with his work here in the states with NF Mid-Atlantic. He also discussed his role in my Many Faces of NF project and talked about the various paintings I have done of him. If you can read Dutch, here is the article. I had to use Google Translate! haha.. 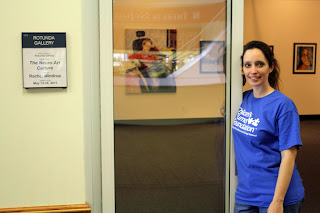 And so if I can use art as merely a tool (rather than an end in itself) to relay my message than I will certainly try. I think this last aspect is what seems to befuddle so many other artists. Many of them can't get past painting as painting. They are very well intentioned. But, I don't view the painting as the end of the discussion. I view it as a way to initiate a dialogue. I don't even care if people remember my name as I doubt that they will. After all, I don't always remember the artist's name when I look at portrait, but I do remember the person portrayed. Hopefully, they will most likely remember the stories. That is the double nature of portraiture. The portrait is less about the pigment on the surface and actually becomes the person himself. And that oscillation is what I am interested in. I'm simply here making introductions and I just happen to use oil paint to do it. I'm a conduit and I'm hoping to re-present people in a way that presents them as a person first and genetic disorder second.

I'll just end this blog with a quote:

“Nothing in the whole circle of human vanities takes stronger hold of the imagination than this affair of having a portrait painted. Yet why should it be so? The looking-glass, the polished gloves of the andirons, the mirror-like water, and all other reflecting surfaces continually present us with portraits, or rather ghosts, of ourselves which we glance at and straightway forget them. But we forget them only because they vanish. It is the idea of duration - or earthly immortality - that gives such a mysterious interest to our portraits." -Nathaniel Hawthorne - The Prophetic Pictures
Posted by rmindrup at 4:19 PM

Every time I see or read about your work, I get an proud feeling. Rachel I'm so happy to have you as an friend and I'm happy to be an part of you art collection. Thanks for everything ;)