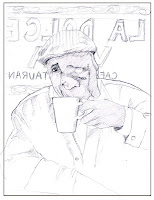 After my mentor meeting, we both agreed to make sure I tried to pick one of the poses where Reggie wasn't looking straight at the viewer. Since the idea is to catch a person just sipping a cup of coffee and doing something very natural, we didn't think having someone you didn't know staring right at you would have the right effect. It would create an awkward feeling, which isn't at all what I want the painting to be about. I want to show people with NF just going about their daily lives, routines, and habits and let the viewers be able to see them in very humanized roles. The idea is that the painting has much less to do with NF and much more to do with the person. 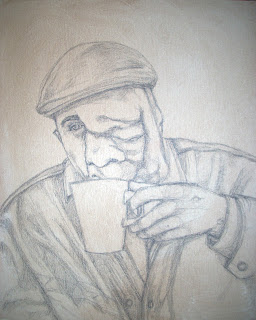 Here is the process so far. I started with this sketch. I decided after I drew it that I wanted to zoom in a little more because I really want people to see Reggie's face. I'm also thinking about getting rid of the letters on the back of the winder and just putting in some impressionistic background cafe objects.

I typically do not paint on canvas. I just prefer the smoothness of hardboard, but for the sake of shipping, it really makes sense to not paint on enormous and thick hardboards. So, I went ahead and prepared a 24" x 30" canvas and toned it with burnt umber. I then zoomed in on my thumbnail and sort of moved my viewfinder around until I found the cropped version I liked best. So, I want Reggie's face and the coffee cup right in the middle of the composition remembering the 80% interior rule vs 20% perimeter rule that every painter knows. I had to really check my proportions on the hand and cup several times to make sure I didn't make it too big or too small. So, it is finally just the right size. 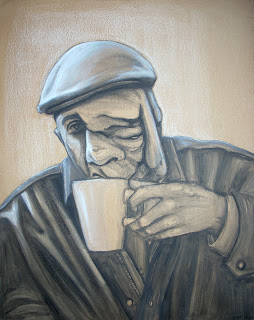 Next, I thought I would do just a light wash with turpentine which somehow turned into doing an entire underpainting. I can't really even recall the last time I did this. Maybe it's because I've been reading about Ingres and the Academie painters in all of my critical theory readings. Of course I am reading about how all of these people broke away from that and were tired of ateliers and so forth, but for some reason I can't shake the beauty of the craftsmanship and lure of the imagery, even if some of the content on those paintings is not all that compelling. 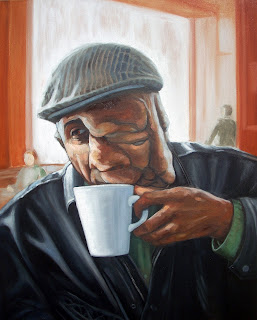 About five or so years ago I studied drawing with Tony Ryder. I never did study painting with him but I remembered his technique of doing light washes with oil first after the charcoal drawing, almost similar to watercolor. I think I am going to do that next and then once I get done with all of this work underneath and have a good solid structure, I will have the foundation to actually start to use all the color work and brush stroke techniques I have been working on this semester.

I realize folks like Richard Schmid can just attack their canvas alla prima, but for now, if I want alla prima to work for me, I think I need to alla prima over a solid underpainting.

My mentor gave me a book written by Ken Howard who is an artist that I would classify as using an impressionistic technique. His beach scenes show little blobs for people in the distance. When I worked on the color portion of this painting, I tried to remember what Ken had written about forgetting that the people behind Reggie are people and just thinking of them in terms of shapes and color. I also tried to remember his discussion of the beauty of grays with just slight color variances. This also helps to offset the foreground elements compared to the background.
Posted by rmindrup at 9:17 PM